A Most Memorable First Patient- Part 2

As you learned in Part 1, it’s my senior year in veterinary school (my clinical rotation year) and it’s my very first time to receive clients.  I have just discovered that my first patient is of all things, a fish.  A trout.  I scanned through the chart pretty quickly because there wasn’t a lot of information in it to be honest.  Apparently, the client was a local trout farmer whose fish had been dying.  He understandably wanted to know why.  That was about it.

A. Skin – Has there been any hair loss?  Ha…. not likely in this case!  Is the animal chewing or licking itself excessively?  Now that’s an interesting visual image.  Are there any rashes, bumps, or sores?  Okay, now that much I could ask.

B.  Eyes, Ears, Nose, and Throat– any discharges from the ears or eyes?  Ears… in a trout????  Does the animal hear alright?  Respond to noises?  Has there been any changes in the animal’s voice?  Good grief…. this is a fish!  And was I actually going to have to examine a trout’s throat????  Do trout even have a throat?  Do trout have a voice?

C.  Musculoskeletal system– is the animal limping when it walks or runs?  Another interesting visual.   I highly doubt it.  Showing any signs of weakness or soreness?  Who would know?

D.  Respiratory– is the animal breathing o.k.?  Any discharges from the nostrils?  Nostrils… in a trout????  Any coughing?  Sneezing?  Can trout cough and sneeze?

E.  Cardiovascular – Is the animal coughing?  Does the animal show any signs of exercise intolerance?  There’s that coughing question again.  And do trout exercise? (visual image of trout on a treadmill).

F.  Gastrointestinal system – How is the animal’s appetite?  What does the animal’s feces look like?  Any diarrhea?  Constipation?  Any vomiting?  Oh Lord, help me, this is getting worse by the minute.  We are dealing with a trout here!  I can’t seriously ask this owner about his trout’s defecation habits can I? (Like he would know anyway).  And can trout vomit?  Is that physically possible I wonder?

At this point, I am starting to freak out a little.  Should I just throw the chart down and run away?  Run far, far, away??  I needed to interview my client to gather information about my patient, but for the life of me, I couldn’t think of a darn thing to ask this owner.  I had never performed a physical exam on a fish in my life.  And furthermore, how long could I keep this fish out of the water for my physical?  I continued on…..

G.  Urinary system– does the animal seem to be urinating normally?  (Groan)  Does the urine appear normal?  Any blood in the urine?  Is the animal having any problems urinating?  Straining?  Does the urine have an unusual odor to it?  You’ve got to be kidding.  I guess trout do urinate, don’t they????

H.  Reproductive system– This is the part where I am supposed to find out about the animal’s genitals.  Do they appear normal?  Is there any vaginal or preputial discharge?  Is there excessive licking of the genital area?  (Another interesting visual).  Do trout even have genitals?   Can’t say I have ever seen any!  I was sure at this point that I was on Candid Camera.   That’s it.  This was all a joke and I was being recorded.

I.  Central Nervous System– how is the animal’s mental status?  What is their general attitude like?  Is the animal able to walk normally?  Does the animal seem depressed?  Alert?  Has there been any history of seizures?  Just what does a depressed trout look like?  Would I recognize an alert trout over a depressed trout?  Does a flopping fish out of water count as seizures?

I was really starting to panic.  I didn’t know enough about trout or trout farming to even be able to talk intelligibly to this owner.  My main fear was that I was going to walk in that exam room and stare at the owner and his trout because I essentially had nothing to ask him.  My first case and I was sunk.  I knew about as much about fish as I did about rocket science.  Handling this case made me feel like a fish out of water (pardon the pun).

I took a deep breath and entered the exam room.  A kind middle-aged man with overalls sat there with a five gallon bucket on the floor beside him.  I smiled, shook his hand, and introduced myself.  Turns out there was not one trout in the bucket, but two.  Trout #1 had died in route and was laying on the bottom of the bucket and trout #2 was not far behind.  It was in a half curled position and swimming floating on its side almost upside down.  I ended up looking into this trout farmer’s eyes and telling him I was very sorry he was going through this.  I think I may have asked him a couple of questions – like how many trout he had lost and maybe how long this problem had been going on.  The rest of the time, I just stared down into the bucket.  I couldn’t see the sense in doing a physical exam on a half-dead fish.  I stammered and stuttered, then I excused myself, told him I was going to go discuss this case with the clinician in charge, and told him we would be right back in. 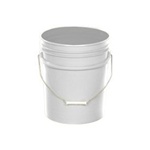 When we re-entered the room, the clinician didn’t have a lot of questions for the farmer either.  Trout #2 was dying as we spoke.  He looked down in the bucket and told the farmer that it would probably be best if we could take both trout directly to pathology to have necropsies performed on them (necropsy is what we usually call an autopsy on an animal).  We told him we would see if we could get to the bottom of this for him.  The trout farmer gave his consent and thanked us.  We gave him our condolences and he left.  I carried the two trout in the five gallon bucket to the necropsy room.  Trout #2 died on the way.

I had rotated into another rotation by the time the final diagnosis came in on the trout.  But I did ask the clinician about them and as well as I can remember, he told me it was a bacterial infection that had infected these trout and measures were being taken to treat the problem.

So that was my first case…. my very first patient.  And needless to say, I will never forget it.

I am a wife, mother, sister, aunt, friend, veterinarian, and wanna be writer. I love nature and animals of all kinds, music, cooking, and spending time with my family.
View all posts by Gail →
This entry was posted in Animals, Veterinary Medicine, Veterinary school and tagged animals, Fear, fish, memories, physical exams, trout, veterinary school, veterinary student. Bookmark the permalink.