Do You Remember These? 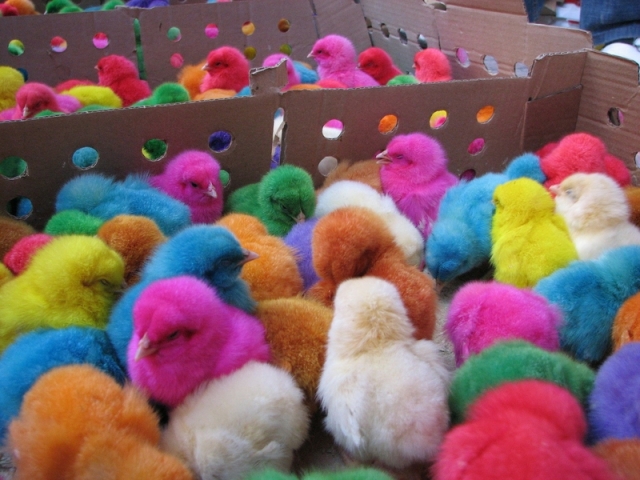 When I was a little girl, there was a local five-and-dime within walking distance from the neighborhood I lived in.  Every year at Easter time, they displayed dyed Easter chicks in their front window, just like you see in the photo above.  My friends and I would ride our bikes or walk to this store where we would stand at that window and gaze at these very colorful little chicks.  I was mesmerized by them, yet I always felt sorry for them because in my little brain, I imagined the baby chicks just being dunked into a vat of dye.  Even my four-year old little self often used to wonder why the poor chicks didn’t just drown.

I’ve since learned that there are two different methods of attaining dyed Easter chicks. One is by spraying the chicks with the dye and the other is by injecting a non-toxic dye into the still developing egg.  Supposedly, it is harmless to the chick and the dye doesn’t last long as when the chick starts growing its adult feathers, they come in in normal color.

When I was six years old, my dad came home one day with three of these dyed Easter chicks.  One for me and one for each of my two older sisters.  My chick was pink and had the very original name of Pinky.  The other two chicks were green and orange (if I recall correctly, one sister named her chick Tiny and the other was named George).  Yes, after George Harrison, of the Beatles.  (Don’t ask me why).  My best friend down the street had a pink chick too.  I can’t deny these little colored chicks were very popular back in the 60s.

I can still hear my mother yelling at my father when he walked into the house with the box of dyed chicks.  And I can still remember hearing her asking him WHAT IN THE WORLD WAS HE THINKING?!  Did I mention that we had a full-grown German Shepherd in the house?  Yes, a full-grown German Shepherd who would have liked nothing more than to devour all three of those baby chicks.  (Thankfully that didn’t happen).  Yes, my father was in the dog house for quite a while after his little purchase.

Our once calm household soon became quite the scene of chaos.  I loved my little Pinky   but as with most “Easter Pets,” our three baby chicks grew rapidly and we had to make other plans for them.  My mother found a woman at the local drugstore who had a farm who said she would be more than happy to take the chicks off our hands (who by the way all turned out to be roosters).

Within just a few years of my dad’s memorable purchase, I stopped seeing dyed Easter chicks in the five-and-dime store window.  I still saw chicks but they were their normal yellow color.  And while they were not near as visually stimulating to look at, I was somehow glad for them.  I think the whole dyeing process was banned for a while in most of the US. I read that after a 45 year ban, that some of the states lifted the ban and made it legal once again to sell dyed Easter chicks.  I’m starting to see and hear about colored chicks again.

While I don’t  think the process is harmful to the chicks, I can’t say I’m really for dyeing chicks (or any animals for that matter– I hear they also do this to bunnies at Easter time).  It’s just not natural.  Some people say it is stressful on them.  While I don’t think it’s the dyeing itself that’s stressful (it’s a non-toxic vegetable dye that’s injected into the egg), I do think it’s the crowding of the poor little chicks into cardboard boxes for shipping that is the stressful part.  I also think it encourages animals to become throw-away pets.  As a veterinarian, I can’t tell you how many times I used to see families with small children come in right around Easter time with a baby chick, bunny, or duckling.  When I would inquire about the pet months later, the answer I heard was always the same:  “Oh we had to get rid of it because it got much too big!”  Did they not think it was going to grow when they purchased it?  I always found it a little sad.

I think if my father were alive today and you asked him about his purchase of the three dyed Easter chicks back around 1966, he would be the first to tell you that it was one of the biggest mistakes he ever made and one of his biggest regrets.  And one my mother didn’t let him forget for a very long time.

I am a wife, mother, sister, aunt, friend, veterinarian, and wanna be writer. I love nature and animals of all kinds, music, cooking, and spending time with my family.
View all posts by Gail →
This entry was posted in Animals, Easter and tagged animals, childhood, colorful Easter chicks, dyeing Easter chicks, Easter chicks, memories. Bookmark the permalink.

10 Responses to Do You Remember These?