Giant Spider in the Bedroom….UGH!!!

A few nights ago, I was just exiting the master bathroom after taking a warm relaxing shower.  With clean, fresh pajamas on and hair up in a towel, I turned the corner to enter the bedroom, and there I saw it:  Aragog (you Harry Potter fans know exactly what I’m referring to) had just entered our bedroom from the hall and was running along the side baseboard and darted right under our bed.  My first thought was that I had no idea spiders could move so darn fast.  My second thought was EEK!!  THERE’S A GIANT SPIDER UNDER MY BED!!!  I wish now I could have clocked that sucker.  Nope, not what I wanted to see just as I was getting ready to climb into a nice warm bed to read for a while before falling into deep slumber. 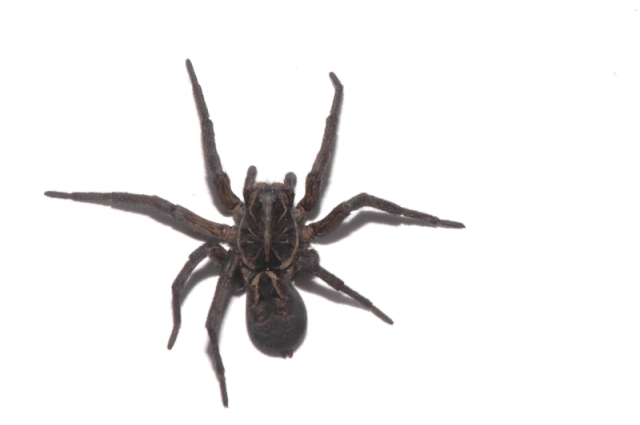 So I did what any good wife does.  I ran for Hubby telling him he JUST HAD TO SEE THIS (and find it).  Hubby came reluctantly, dragging his feet and rolling his eyes all the way.  I came armed with my brand new can of Hot Shot Spider and Scorpion spray.  The kittens were all excited and knew something was up.  They were fighting us tooth and nail to get in the bedroom but I didn’t want them to be carried off by this Nascar spider. And I sure didn’t want to get them near what I was sure was potent deadly spider spray.

Don’t get me wrong– I have nothing against spiders–  When they’re outside.  I prefer that they don’t come into my house, and that they especially don’t get under my bed!  But it seems with the coming of fall and cooler weather, that’s EXACTLY what they want to do.

Armed with flashlights, we searched for the very large black arachnid (which I later determined to be a giant black House Spider) who was finally spotted at the base of the bed post on hubby’s side.  When the flashlight hit the spider’s two main eyes, they reflected back a deep purple color…. sort of like the green retinal reflection of dog and cat eyes at night in car headlights.  My third thought was that this spider’s eyes were kinda beautiful and this is a darn good Halloween spider, but then I came back to the real world and the reality that there was a giant black creepy spider under my bed!

By the time I got in a position that I could reach him with my handy-dandy spray, he was gone, nowhere to be found. Hubby and I were both down on hands and knees with flashlights continuing to look for Aragog.   We couldn’t find him.  Hubby was ready to give up the search but no way was I sleeping in that room until that giant spider was found.  I informed hubby that I would be sleeping on the couch or in another bedroom. For weeks if necessary.  Right about then, hubby announced that he had spotted the spider again.  This time, it was behind the nightstand and tangled among all the electrical cords that go to the lamp, hubby’s CPAP, the telephone, and answering machine cords.  We doused him good, soaking him along with the cords with a zap of the spider spray but it didn’t slow this fellow up one bit.  He (or she) proceeded to keep crawling all the way against the baseboard to my side of the bed, carrying the dust bunnies right along with it (blushes red).

The spray, which says boldly on the can “Kills in Seconds!” didn’t seem to have much effect at all.  We doused again but Nascar spider kept right on crawling and heading for the nightstand on my side of the bed.  Hubby finally went and got a Dixie cup from the bathroom and scooped him in that and then threw him in the commode where he continued to thrash and swim for several more minutes until he was flushed.  Sorry Hot Shot but we were not impressed with your spray.   Maybe it was not designed for Aragog spiders.

I am a wife, mother, sister, aunt, friend, veterinarian, and wanna be writer. I love nature and animals of all kinds, music, cooking, and spending time with my family.
View all posts by Gail →
This entry was posted in Uncategorized and tagged arachnophobia, Aragog, black house spider, Fear, Hot Shot Spider and Scorpion Spray, spider under bed. Bookmark the permalink.

8 Responses to Giant Spider in the Bedroom….UGH!!!