Yesterday’s WordPress one-word daily prompt was Fierce.  While I was in the middle of posting on this prompt, my computer went down.  Hence, I am finishing the post today.

As a student in veterinary school and while practicing, I came across my share of “fierce”animal patients.  Thankfully, they were rare and most of our patients were very sweet and well-mannered.

The ones I always dreaded were the “cage domainer” cats.  These are cats who become fearfully aggressive as a protective mechanism.  Some of the nicest cats could turn into fierce tigers when placed in a cage.  Trying to get those cats out of their cage was always tricky (and scary).  Some of these cats will not even allow the owners to get them out of the cage and I’ve seen these cats attack their own owners.  They would crouch down in the corner of the cage, ears back, pupils widely dilated, while hissing and growling (and sometimes letting out ear-piercing screams).  We sometimes had to get very creative in getting these cats out of the cage.  How would you like to reach in this cage to remove this scared shelter kitty?

My cat Dakota is a cage domainer.  I’ve had to leave him once at the vet clinic for surgery and I was summoned to come get him out of his cage when it was time for him to go home.  Another time, I left him at a boarding facility and was also called to come get him out of the cage.  I witnessed his behavior while walking towards the cat condo where he was being housed and I didn’t recognize my cat.  He is sweet and loving at home, purrs loudly and bunts lovingly, but he had turned into a fierce little Tasmanian devil in that cage.  He is very skittish and has been since I got him as a small kitten.  I know he was terrified and I hated it for both him and the kennel employees.  I no longer board him at the pet kennel.   If we have to leave him, we have neighbors come in and take care of our cats now.  It’s much less stressful for all involved.

Dakota (not looking too fierce here) 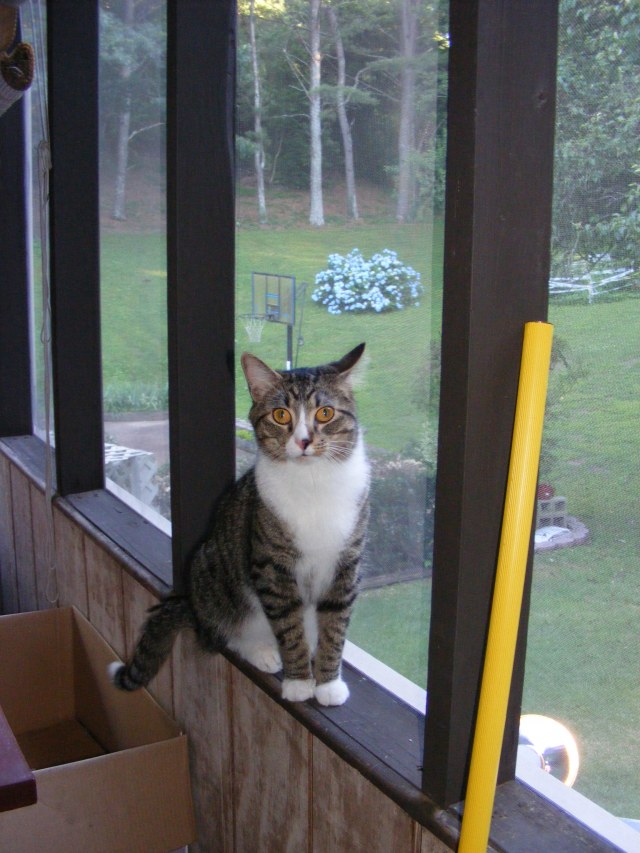 There were certain “regulars” at the vet clinic I worked at that I will always remember. There was “Macho,” the 15 lb. black and white cat who always was a problem “child” when he came in.   Just trying to get him out of his pet carrier was an ordeal. It seemed Macho bit at least one person at every visit.  To my shock and surprise, the owner told me Macho bit her at home too.  Sorry, I could not and would not own an animal who bit me.   Macho was just a bad boy.

There was “Ninja” a black chow who had been told along with his owners by most veterinarians and groomers in our city to Never. Come. Back.   The owners were desperate for  help in getting Ninja bathed and groomed so the owner of our clinic, feeling sympathy for them, did not turn them away.  I don’t know, maybe he saw Ninja as a challenge?  Every time Ninja came into our clinic a member of the staff ended up at the Urgent Care medical facility down the road. They knew us well.  Ninja was fast as lightning and gave no warning when he was going to strike.  He was extremely unpredictable.  So when Ninja came in for a bath or vaccinations, the owners would place a wire muzzle on him before they left.  Ninja knew how to get around muzzles though and it eventually got to the point, where we refused to bathe Ninja without using some sort of sedative on him (which sometimes worked and sometimes didn’t).

I remember a time when I was working at the clinic as a technician (prior to going to veterinary school).  We had done surgery on a German Shepherd who was waking up from anesthesia in the recovery room.  The vet had walked into the recovery room to give the still somewhat groggy dog (or so he thought) an injection of antibiotics.  The dog came right up off the floor, standing on its rear limbs and went for the veterinarian’s neck.  He bit the vet in the shoulder and he bit hard.  I was out in the treatment area about 5 or 6 feet away and I saw it all happen. It was over in what seemed like nanoseconds and I remember the blood.  The vet narrowly escaped getting bit in the face.

There was the gigantic polar bear at the Knoxville zoo who despised me and wanted nothing more than to eat me.  As the vet students followed the zoo doctor on his rounds, we often congregated right outside this polar bear’s cage.  He would single me out and glare at me and his eyes never quit following me.  He never watched another student, always just me.  Sometimes he would charge the fence and hit it hard with his paws.  I thought my heart would explode out of my chest and I knew if that fence ever gave way, that I was a goner.  I was terrified of this monstrous white bear and never knew why he had it in for me.  The zoo vet noticed it too and commented on it the day I finally got my courage up with my comment of, “Must we ALWAYS congregate right by his cage?”

And last but not least, there was the very large Chimpanzee named Debby who grabbed my hand through a chain link fence and bit me on a cold and snowy February day while the vet students were getting some experience in treating frost bite on the monkeys and apes at the local zoo.  I tried to make a fist as I knew what she was going to do as soon as she grabbed me, but my strength was certainly no match for hers.  I was a rag doll in her hands.  She came close to amputating my right index finger and probably would have if not for the quick thinking of the zoo vet resident who ran toward the fence screaming with all his might and hit the fence hard, scaring her back.  The wound required stitches and gave me throbbing pain for quite a while.  I learned just how much a little finger can hurt!  Then there was the worry about Simian AIDS (AIDS was just hitting the news scene at the time).  I had to have hepatitis shots and a painful Immunoglobulin shot and I still have numbness in that finger from the nerve damage.  I learned later that Debby the chimp had amputated a zoo keeper’s finger as well as a child who had climbed the fence one day and approached her enclosure.  So I guess I should feel fortunate that I still have a finger or for that matter a hand and arm!  Believe me, I’ve had nightmares about that chimp (who was more the size of a gorilla).

Yes, I’ve seen my share of fierce animals.  I guess you could call it an occupational hazard.  Most jobs have them.

I am a wife, mother, sister, aunt, friend, veterinarian, and wanna be writer. I love nature and animals of all kinds, music, cooking, and spending time with my family.
View all posts by Gail →
This entry was posted in Animals, Daily Prompt and tagged animal bites, dangerous animals, fear aggression in animals, fierce, fierce animals, memories. Bookmark the permalink.