This post is in response to the WordPress one-word daily prompt: Graceful

Sometimes these one-word prompts really stump me.  Nothing comes to mind at reading some of them and the writer’s block wins.  That was not the case today as a vivid image came to my mind when I saw today’s word, graceful…  The image of a graceful swan I once knew.

Many eons ago, I worked at Opryland, USA theme park in the petting zoo.  In this zoo, was a duck pond where, as you could guess, many ducks happily swam.  There was also a very beautiful and graceful white swan.  I’m sure she had a name but for the life of me, I can’t remember what it was.

I was less than fond of that swan.  Some may even say I hated her.  She was well, just downright mean.  She didn’t like anybody or anything.  She chased and abused the sweet little ducks who shared the pond with her and even attacked the not so graceful goat who happened to accidentally wander into her domain and fall into her pond one day.  The park sold food to feed the swans and the ducks and she hissed at anyone who would get near to offer her food.  But oh, even her hiss was graceful!  Just walking by the pond would elicit a loud hiss from her.  She bit me (or maybe the more correct term would be pinched) when I stepped over the fence to retrieve some trash a guest had thrown into the pond one day. She spread her wings wide and scurried across the pond right to me and went for my upper leg. She meant business and I had a nasty black, blue and green bruise on my thigh for weeks.  She could reach you in nanoseconds from wherever she was on that pond and there didn’t seem to be anything on God’s green earth that she was afraid of. 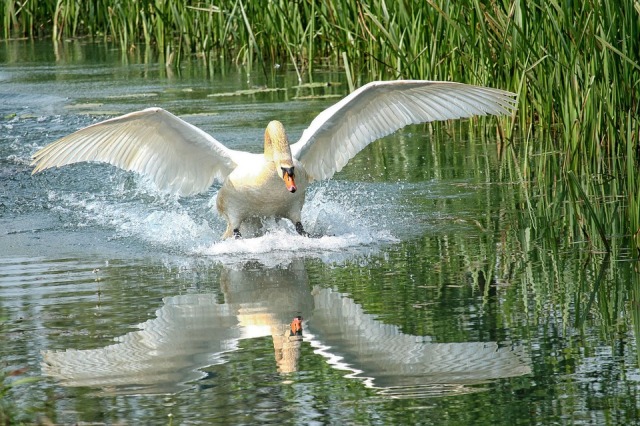 Yep, I just didn’t much care for Miss Graceful swan.  One day I was manning our little feed house right across from Her Highnesses pond, where we sold feed for the tourists to feed the animals.  I was admiring how gracefully she glided across the water.  No doubt she was a beautiful creature and was the epitome of grace.  I will hand that to her.  An elderly nice looking gentleman approached me at the window, pulled out a $100 dollar bill and laid it down.  We sold ice cream cones filled with goat feed for 25 cents and bottles of milk to feed piglets for 25 cents, so I couldn’t quite fathom him wanting to break a $100 dollar bill for these low-priced items.  He then said, “Little lady, I will give you this $100 if you can tell me the correct term for a baby swan.”  I know now that the term he was looking for was “cygnet,” but I didn’t have a clue then.  Then he gave me another chance.  He said he would still give me the $100 if I could tell him what a male swan was called. I didn’t know that a male swan was called a “Cob”  but I learned it years later when I read E.B. White’s The Trumpet of the Swan (still in my opinion one of the most endearing children’s books of all times).   I would not be getting $100 that day.  I’m not sure why he didn’t go three for three and ask me what a female swan was called (a Pen) but he didn’t.  After failing to win the money, I was grumpy. I walked by the duck pond and as usual got hissed at by the swan terrorist.  I’m pretty sure I opened my mouth wide and hissed back at that crazy bird. Maybe I was trying to tell her I could be grumpy too.

The day finally came when I was to leave my beloved job in the petting zoo to broaden my horizons and get experience with a practicing veterinarian.  It was tradition in the animal department at Opryland on your last day of working to be thrown into the duck pond.  I’m not sure if this was supposed to be flattering or considered an honor or what, but it just about always happened.  I loved my job and I was both excited and sad at the thought of leaving it but I was NOT thrilled at the thought of getting thrown into the smelly green duck feces infested waters.  Even just the thought of that made me tremble because I figured I might get eaten by the great white swan who lurked in those waters.  As night went on and the 10 pm closing hours of the park drew near, I was sighing a big sigh of relief that my life had been spared. But as the announcement came over the loud speakers that the park was getting ready to close and I was sweeping up spilled popcorn, I was suddenly snatched up and tossed over the fence into the pond.  I often wish I could have a video of that night because I’m convinced I probably broke some kind of Guinness Book of World Records for the breakneck speed I employed in getting myself out of that pond.  And I’m sure I was not a bit graceful in my exit.  It wasn’t until I was hurling my soaked body over the duck pond fence, that I realized I had escaped unscathed.  I looked around and Miss Graceful Swan was asleep under the Weeping Willow Tree with her bill tucked gracefully under her wing.  I’m pretty sure though that I saw her lift her head and gracefully smirk at me as I walked by.

I am a wife, mother, sister, aunt, friend, veterinarian, and wanna be writer. I love nature and animals of all kinds, music, cooking, and spending time with my family.
View all posts by Gail →
This entry was posted in Uncategorized and tagged Graceful, graceful swans, memories, Opryland, Opryland petting zoo, swans. Bookmark the permalink.