Last night at dusk, my hubby and I decided to take a short walk.  Short because he’s had this on-again off-again foot pain lately that seems to be aggravated by long walks.  And short because it was miserably hot and humid outside and the mosquitoes always bite on nights like that.

As soon as we got to the end of our driveway and began strolling up our street, a neighbor shot off some very large fireworks that were so sonic-boom-loud, they startled me and made me jump.  At the same time, I heard a loud rustle to my left and saw a terrified wide-eyed deer come leaping out of the edge of the woods, her tail raised, flashing the white fur on her tail’s underside.  She gracefully leaped and zigzagged across the yard not knowing exactly where to run.  I pointed and told my husband, “Look, the poor thing doesn’t know where to go— between all these booming ear-splitting fireworks and all the thunderstorms we’ve had lately, the poor deer must be just scared out of their wits.” I felt bad for her. 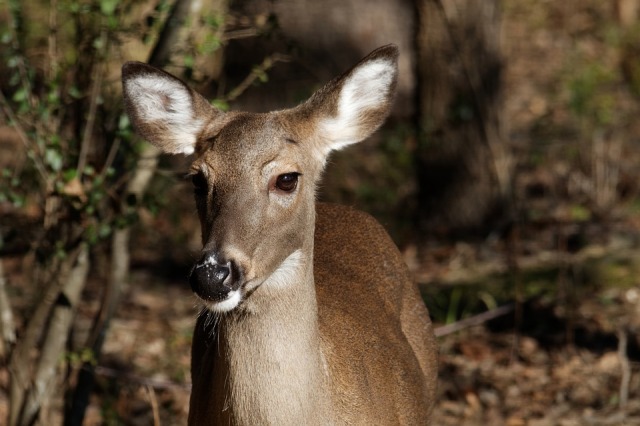 We lumbered on.  The explosions intensified, the loudness grew more deafening.  The mosquitoes started biting our faces.

The little brown bats were out in droves swooping and having their go at plucking all those pesky little mosquitoes out of the air which made me grateful for their presence. Dusk is my favorite time to walk because it’s the crepuscular critters that seem to be my favorites. The bats start appearing overhead to begin their insect hunt for the night.  I love to watch them.  The lightning bugs start twinkling.  And the deer usually start emerging from the woods where they’ve spent the day taking refuge from the oppressive summer sun.  I’ve always loved this time of night.

But then more loud booms and the fireworks seemed to be everywhere.   Even the bats seemed distressed by the noise and the fireworks that were going off all around them. They seemed to be flying right above our heads and following us all the way up the street.  I felt bad for them too.  As they swooped within inches of hubby’s head, he said, “What’s up with the bats tonight? They sure are flying a lot closer than usual.”  “They’re freaked out over the fireworks too, and confused,” I said.  “It’s probably messing with their echolocation.  Or it could be that they’re just trying to get to all the mosquitoes we seem to be attracting around our head, face, and neck, so they’re having to get a little closer,” I mused while watching hubby duck.

We decided to head back  home.  I started thinking about and reminiscing how my mother never liked fireworks, especially the kind that were shot off in the neighborhood on the Fourth of July.  She always said they made her nervous.  I could never understand that as a kid.  Couldn’t fathom it.  I mean, how could ANYONE not like to watch fireworks?!  Now that I’m older, I kinda do understand it.  I was feeling a little nervous and jumpy last night myself. I thought of my sister’s cat who is so scared of fireworks and who was probably at home at that very minute hiding under a bed.  I thought of my old white German Shepherd, Tellico, who I acquired while in vet school, who was also petrified of both fireworks and storms. So petrified that I often had to give him a sedative to calm his nerves.  He was 100 lbs. and slept next to my side of the bed, but if he heard thunder in the middle of the night, he could stealthily sneak up in our bed and snuggle right in between my husband and me and we wouldn’t even know he was there until the next morning.   We used to laugh at how a 100 lb. dog could sneak into our bed without us even knowing.  I reminded hubby of that as we walked back home.  He smiled.  “He was always good at that,” he said.  “Yes, he was,” I mulled. 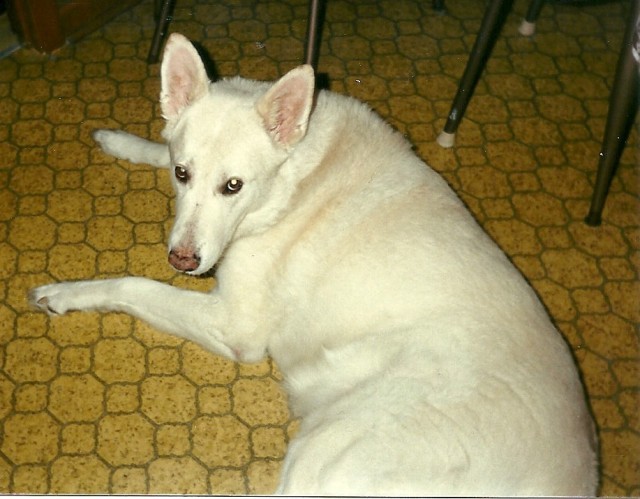 And then I thought of another German Shepherd I had when growing up.  Baron. He wasn’t scared of storms or fireworks in the least.  He would lay out in the middle of the yard in a storm and we had to hold him back or keep him on a tight leash on the Fourth of July, because he lived and breathed to try to attack the fireworks that were being set off. I thought how much animals are so much like people.  Some are scared of fireworks, some aren’t.  Some are terrified of thunderstorms.  Some aren’t.

The fireworks tents won’t come down for a day or two so I’m afraid the animals are in for another few traumatic days of the loud scary booms.  God love ’em.

I am a wife, mother, sister, aunt, friend, veterinarian, and wanna be writer. I love nature and animals of all kinds, music, cooking, and spending time with my family.
View all posts by Gail →
This entry was posted in Animals, Daily Prompt, Fourth of July, Holidays and tagged animals and thunderstorm phobias, animals scared of fireworks, bats, crepuscular animals, deer, Fourth of July. Bookmark the permalink.