My family acquired a cute little six-week old German Shepherd puppy when I was almost 11 years old and in the 6th grade.  My father was a pilot and one of the line boys at the airport he worked at had a German Shepherd female who had had pups.  Our family had owned a German Shepherd previously and we were all quite fond of the breed.  The black and silver German Shepherd puppy my father brought home was the “runt of the litter.” We named him Red Baron (which was shortened to Baron).  Somehow his nickname became Bubba (I think my mother was responsible for that).

For the first week or two of his life, Baron slept in a little cozy box we had prepared for him with towels, a soft pillow my sister had lovingly stitched, an alarm clock and a hot water bottle.  He was a cute little black/silvery furball who reminded me more of a little piglet than a puppy. He made sweet little grunting and snorting noises that made us smile.

Our veterinarian examined Baron, declared him healthy, and started him on his temporary distemper vaccinations.  Our family quickly grew attached.  Baron was a great dog and became the neighborhood dog.  Everyone loved him. He followed me and my friends everywhere. He went sled riding with us in the winter, camped out in the backyard with us in the summer, and ran alongside us as we rode our bikes all over the neighborhood. He was our protector and he did his job well.  If I spent the night with a friend, he settled right down on their front porch for the evening and you could always bet on him being there when we awoke in the morning.  Giving him a bath was a neighborhood event.  He waited with us at the school bus stop in the mornings and often tried to trick the bus driver into letting him climb aboard the bus to go to school with us.  In the afternoons, he waited patiently in the front yard for that yellow school bus to bring us home to him.  And when he’d see and hear that bus come up the hill, he was there to greet us with wagging tail as we stepped off.

My friend Debbie playing with Baron 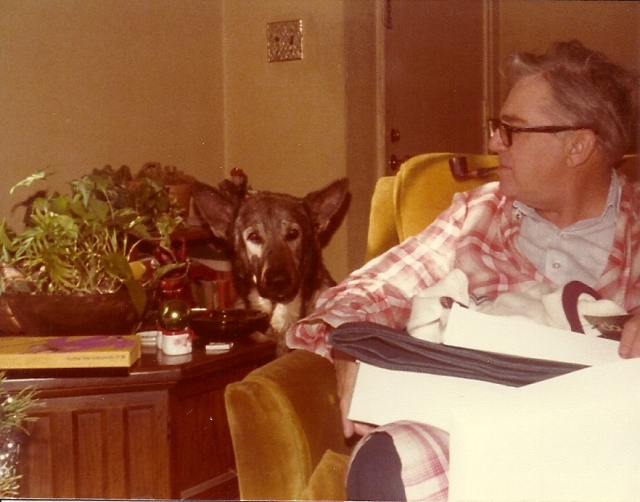 Baron and my dad on Christmas morning

Unfortunately, Baron was never a very healthy dog.  We learned after acquiring him that he had been inbred.  Baron’s mother had actually mated with her son, so Baron’s father was also his brother.  Baron had multiple health problems, like demodectic mange, severe skin allergies, hip dysplasia, and a malabsorption syndrome which caused him to be thin most of his life. We worked hard to keep weight on that sweet dog.

He developed a rather large cyst on his head at a young age (giving him the temporary nickname of knot head) which required surgery. For the remainder of his life, he had this odd (but I must admit cute) little swirl of hair on top of his head.  But we loved him, health problems and all.  It broke my heart when it came time for me to leave him to head off to college.  He moped and I moped.  But every weekend I came home and he forgave me for leaving him.  Until Sunday evening, when it was time to head back to college, and the moping would start all over again.

When Baron was eight years old, we found a knot in one of his mammary glands.  We took him to our veterinarian who thought it was just a cyst.  He recommended surgical excision.  I was majoring in animal science with a pre-vet emphasis at the time and had wanted to be a veterinarian since I was seven years old. I asked our vet (the one I would later go to work for) if I could observe Baron’s surgery.  He said normally he would not recommend an owner observe their pet’s surgery but since I wanted to be a veterinarian, that it was fine with him, if  I was sure that’s what I really wanted to do.  I said it was.

So my first surgery to observe was on my own dog.  It’s not something I would recommend! It was probably the hardest surgery I ever had to observe.  I watched the veterinary team administer the anesthesia– watched my dog as he slipped into unconsciousness and his body became limp. I watched as they stretched his mouth open wide, pulled his dry pink tongue out and inserted the endotracheal tube. I watched as they hooked him up to the gas anesthetic machine.  I then watched them shave him, vacuum the loose hair from his abdomen, carry his limp body into the surgery suite, lay him on the metal surgery table on his back where they extended and tied all four of his legs down with white soft ropes.  I watched as they hooked him up to a cardioscope and then prepped his surgical site with Betadine soap scrubs followed by Merthiolate spray.

I watched the veterinarian as he donned a green cloth surgical cap and mask, did a lengthy surgical scrub of his hands, and then entered the surgery suite to don gown and gloves.  I watched him as he carefully opened the sterile surgical instrument pack.  I remember the vet sternly warning me that the most important thing I needed to remember that day was that I was NOT to touch anything blue or green or I would break sterility, thus possibly harming my dog.  I remembered. I watched as he draped my dog, applied the towel clamps to anchor the drape down, took the scalpel and made the incision around the mammary mass. I watched my dog’s bright red blood ooze from the incision. 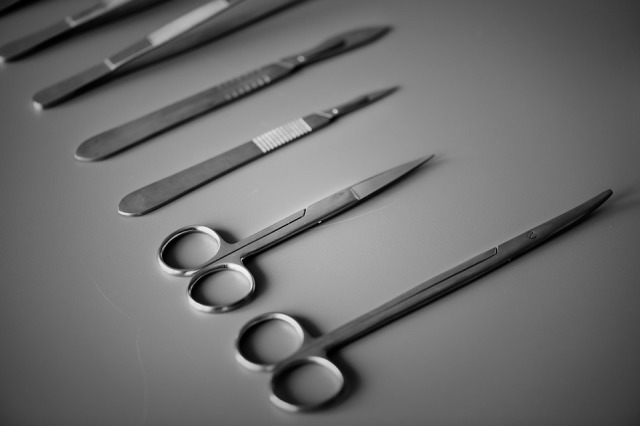 I think I held my breath under my mask for most of that surgery.  My emotions swelled throughout the 30 minute procedure like a flood tide. I remember perspiring heavily under the giant swinging surgical light overhead that spotlighted every drop of blood and I couldn’t wait for it all to be over.  I watched the cardiac monitor as the EKG tracing blipped in green across the screen and I listened to the loud beeps of the machine as it monitored my dog’s heart rate and rhythm.

The veterinarian mentioned during the surgery, that the mass appeared to be solid and not a fluid-filled cyst as he originally thought.  This was not what he had hoped. A biopsy was in order.

After the surgery, I watched them strap my dog on a green vinyl pet stretcher and carry him downstairs to a recovery area.  I sat with my groggy boy until he came to his senses.  My family took him home late that afternoon when he was awake enough, and what I remember most about that night was the how the Methoxyflurane gas lingered on his breath.

Baron’s mammary mass turned out to be an aggressive malignant tumor. Yes, our male dog had breast cancer.  We knew our boy’s days were numbered. I’ll never forget my mother baking him a small cake for his 8th birthday.  He would not live to see his 9th.  I don’t really remember how much time passed until we noticed that he seemed to be breathing harder than normal.  And coughing.  Chest X-rays confirmed our sweet boy had metastatic lung cancer.  Weeks later, we had to say goodbye to our four-legged friend and family member.  I cried and cried that day as did our entire family.  He’s buried at a pet cemetery in Columbia Tennessee.

Baron taught me so much about love for which I am forever grateful.  I miss him still. 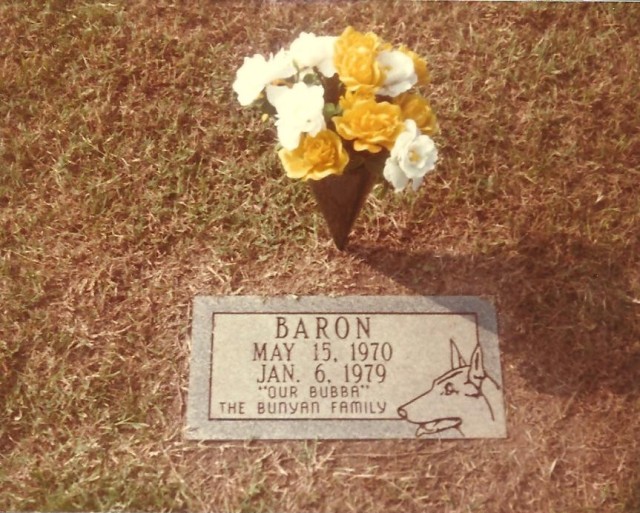 I am a wife, mother, sister, aunt, friend, veterinarian, and wanna be writer. I love nature and animals of all kinds, music, cooking, and spending time with my family.
View all posts by Gail →
This entry was posted in Animals, Daily Prompt, dogs, Veterinary Medicine and tagged canine love, mammary cancer in male dogs, observing a pet's surgery. Bookmark the permalink.

8 Responses to A Difficult Observation