Don’t ask me why I had a notion today to write about Brown Recluse Spiders.  I just did. I live in the southeastern U.S. and yes, we have both black widows and brown recluse spiders here (lucky us).

Several years ago I wrote about an encounter I had with a black widow spider that my neighbor found in our water meter box.  My site stats are showing increased activity with that blog post over the past several days, so the black widows must be making appearances somewhere.  If you want to read my story, click here.

I’m scared of both black widows and brown recluses, but at the same time, they fascinate me.  I used to check out venomous spider books at the library and read them to  my sons when they were at that bug-loving stage. We always were fascinated to read and learn about them.  I also felt it was my duty to educate my sons about them since we live in an area where they are quite common.

I have black widows outdoors and could probably go find one now if you asked me to, but please don’t ask.  Thankfully, I’ve never found one in my house or basement.  I have, however, found a brown recluse in my house many years ago (or at least I’m pretty sure it was a brown recluse– identification was a little challenging after I squashed it with my shoe)!

Here is a brief description of the brown recluse from Wikipedia:

Brown recluse spiders are usually between 6 and 20 millimetres (0.24 and 0.79 in.), but may grow larger.  While typically light to medium brown, they range in color from whitish to dark brown or blackish gray. The cephalothorax and abdomen are not necessarily the same color. These spiders usually have markings on the dorsal side of their cephalothorax, with a black line coming from it that looks like a violin with the neck of the violin pointing to the rear of the spider, resulting in the nicknames fiddleback spider, brown fiddler, or violin spider.

At the veterinary clinic I worked at years ago, we had a brown recluse specimen preserved in formalin.  We occasionally treated brown recluse bites in our patients and I always liked to show clients what the culprit looked like.  I looked at it under magnification one day (yeah, I’m curious like that) and was absolutely amazed at just how much the “violin” on its cephalothorax looked just like a real violin!  These spiders have long spindly legs and their abdomen is covered in very fine hair, which actually looks like fur.  You have to look very closely to even see it though, and from a distance, they appear hairless (at least the ones I’ve seen do).  They have six eyes arranged in pairs (most spiders have eight eyes).

I remember a few years back when my husband and I were moving our oldest son out of his college dorm and back home for the summer.  He lived in an older dorm but the students (especially the guys) liked these dorms because they were much more spacious than the newer dorms, especially the bedrooms.  They had full kitchens.  And you know the well-known formula.  College students + kitchens = bugs.  Okay, I know that’s not always true.  Being an older dorm though, my son said they spotted occasional bugs (probably why there were many more male students living there than female students).  The day we had moved our son into the dorm, we noticed a few earwigs along the baseboards in the hallways and a roach or two.  My husband sprayed along the baseboards.  My son put out some silverfish packets which took care of the earwigs and Combat® roach discs which took care of the roaches.  Maintenance sprayed the dorm suite once about mid semester (that my son knew of) and he said he really didn’t see much of anything else in the way of bugs. Bugs don’t tend to bother him.

My son was an RA and so he had the largest bedroom of the three (which was actually a bedroom designed for two people).  It was a long, narrow room.  He kept two glue insect board traps in that bedroom (one on each end of the room).

While hubby and son loaded up the last of his belongings into the car, I began vacuuming the rug in his bedroom.  I came across one glue board (don’t EVER step on one of those things or you’ll live to regret it) and it looked sorta like this. 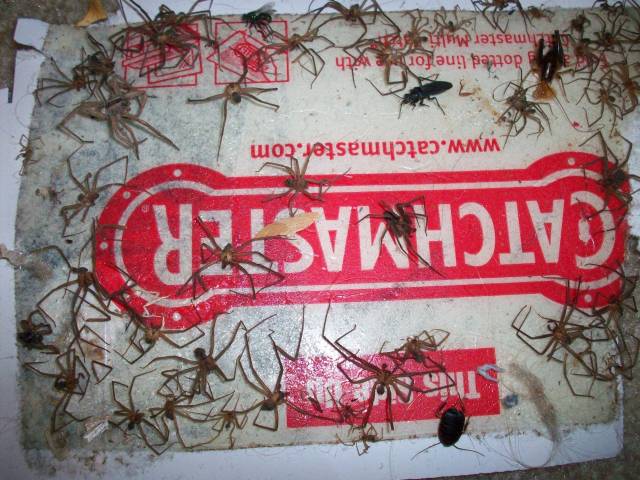 Do you see all those brown recluse spiders?

I showed the board to my son, who promptly went to retrieve the glue board trap on the other end of the room.  It was the same, if not worse, and had multiple brown recluse spiders on it, some of which looked freshly caught. Actually, if truth be told, his weren’t quite as bad as the one in the picture but finding one was too many for me.

Yes, as any mother would, I freaked.  My son’s dorm was obviously infested with brown recluse spiders.  I was horrified thinking that my progeny had just shared an entire semester with poisonous arachnids.  At the time, I had a friend whose son had been in and out of Vanderbilt Medical Center, with what the doctors thought was a brown recluse spider bite.  He had endured multiple surgeries to deal with a necrotic wound and his doctors feared amputation. Looking back, that probably contributed a bit to my freaking.

I got home and promptly fired off an email to the head of university housing and told him about our find.  I had met this man, liked him a lot, as did my son, and I knew he would get right on the problem and stay on top of it.  Here was his immediate reply to me:

I thank you for the note.  Please know that we do take Pest Control seriously and I find the contents of your note quite disturbing.  University Housing maintains a separate Pest Control contract than the remainder of the university because I am aware that we in Housing are serving a different population than those utilizing a classroom and or lab setting.  Our contract requires our contractor to assess each pest situation, determine a course of action to eradicate the pests, and follow-up.  It appears to me that they did not follow steps two or three of this process with regard to your son’s room.   This is even more disturbing as _______  (name of dorm) presents its own unique challenges having full kitchens and some of the challenges that they may provide.  We have placed special emphasis (and investment) with this provider to be certain that we were aggressive in managing the pest population over there.

Thank you again for the information, and please pass on my apologies to your son for the oversight and any inconvenience this may have caused.

Then my youngest son, just a few years later, was bitten by a brown recluse spider (or so the campus doctor suspected).  Same university, different dorm.  A brand new dorm.  He was actually in class when he felt a sharp pin prick on his inner thigh. It hurt enough that he excused himself from class so he could go to the restroom and check it out.  He never saw a spider but the skin area where  he felt the pin prick was reddened.  It formed a red papule, then pustule in the center of the reddened area within hours and then over  the next several days, became necrotic.  He probably would not have even gone to the campus clinic had a roommate not diagnosed him with a black widow bite (and hinted that death was a possibility). The doctor though suspected a brown recluse bite and they treated him with antibiotics and steroids (both systemically and topically).  I pleaded with my son never to leave clothes lying around and to always shake them out before putting them on.  Thankfully, his bite was not severe and the necrosis was mild, as are most brown recluse bites.  Contrary to popular belief, only a small percentage of brown recluse bites cause a severe necrosis.

A doctor once told me that brown recluse bites are way over-diagnosed.  He said that many other conditions (especially skin infections like MRSA) are often mistaken for brown recluse bites.  He said the spider will try its darndest to get away from you without biting as they are as scared of us as we are of them.  And when they do bite, it’s generally a mild reaction. I was told that usually the initial bite is not felt, although on occasion, some patients report feeling a sharp pin prick pain like my son did.

Brown recluse spiders like dark areas (like outdoor privies, barns, sheds, wood piles, etc.). They prefer dry areas. They are known to get inside shoes and gloves, and they prefer areas that go undisturbed, like cardboard boxes and piles of paper.  They usually will not inflict a bite unless they are threatened or disturbed (why people are often bitten by spiders when putting shoes on).  Most humans are bitten while putting on clothes that have sat undisturbed for a while. The bad thing about brown recluses, is that once you get an infestation, they are very difficult to eradicate.  And that’s because they’re so good at hiding in things to escape the pesticides used to kill them.

I once volunteered to help clean a house that was occupied by a hoarder (yeah–what was I thinking?).  When I first walked in and looked at the almost knee-deep mess in every room, my first thought was that there were probably all kinds of bugs and spiders living in there.  I was dead wrong.  Turns out, even the bugs found it too disgusting to live in.  While cleaning the first day with a friend, we saw only one cockroach, which was already dead and buried under debris on the bathroom vanity.  (And we came to the conclusion that he probably had committed suicide).  We surprisingly never saw one spider.

Do you have a brown recluse story to share?  Feel free to tell me about it in the comment section.  And no gloating from those of you who live in the north, who don’t have them and never will.