This morning, the hub had an early morning physical therapy appointment for some hip and back pain he’s been having.  He backed his truck out of the garage into the driveway and was surprised to see a dead opossum laying right smack dead in the middle of the driveway beside the house.  Standing next to the opossum was one of these.

It looked like the black vulture was getting ready to “do his duty” so the hubby left him to his work.  When he came home a couple of hours later, the opossum was still there but the vulture was gone.  He walked in the house and announced that there was a dead opossum in our driveway.  “At first I wondered if I had backed over it in the driveway when we came home last night, but I just don’t think we could have done that and not known it–  I think we would have seen it on the back-up camera and surely we would have felt it had we hit it,” hubby said.  I agreed and didn’t think we had hit it.  “Poor thing,” I lamented.  “I wonder how it died?” I asked.  We started reminiscing about the neurologically deranged raccoon that was repeatedly circling in our driveway one summer day years ago.  I had suspected rabies or more likely distemper.  “I still worry that that raccoon could have possibly had rabies, but Opossums are pretty resistant to rabies,”  I told hubby.

I like opossums.  When I was in practice, I had two wildlife rehabilitators who used to bring in opossums to me quite frequently.  Because they can hiss and bare their teeth when frightened, people can mistakenly think they’re mean and aggressive.  The ones I treated were always quite docile, never gave me a problem, and generally were a joy to work on. I treated one older opossum who had a large mammary cyst in her pouch (the size of my fist) and she would sit still and calm while I aspirated the fluid from the cyst to drain it. She was sweet as can be and loved to cuddle. 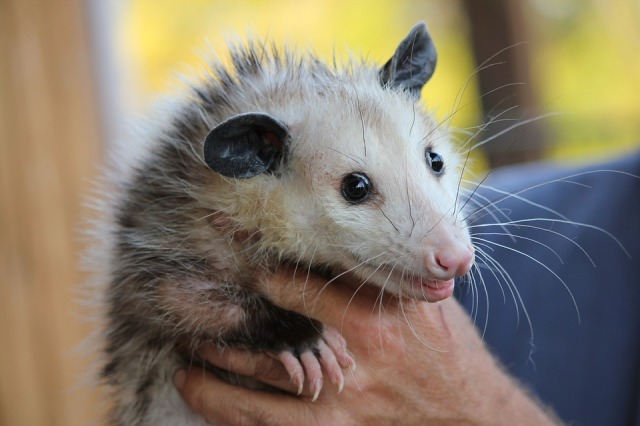 I am fascinated by vultures.  Here in the southeast, we have both black vultures and turkey vultures (erroneously called turkey buzzards).  They are easy to distinguish as black vultures have a black head and turkey vultures have a red head.  I remember an interesting lecture we had on them in veterinary school (or I thought so anyway) and a professor telling us if he heard any of us refer to them as “buzzards,” that it was grounds for dismissal from the program. He was kidding but he said he better not ever hear us call them that.  They were vultures, not buzzards.  When my kids were small, I remember checking out a fascinating book in the children’s section of the library called Nature’s Flying Janitor. It was a very good and educational book all about vultures.  My kids loved that book and we checked it out dozens of times. We learned how very important vultures are to the ecosystem and how they play a big part in preventing disease.

The face only a mother could love.  Well… and maybe God 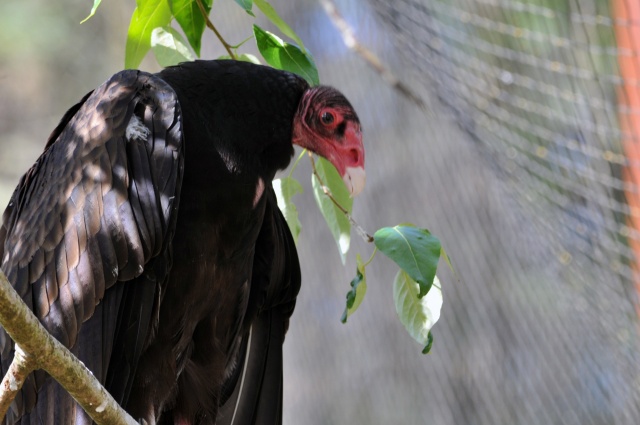 A short time after hubby got home and informed me of the dead opossum, we were off to go shop for a new mattress.  Before getting in the truck, I walked down the driveway  to see if the opossum was still there. It was and there were no vultures in sight.  I told hubby the opossum was going to start smelling if we didn’t do something (or the vultures didn’t hurry up and do their job).  I took a quick glance to see if I could determine why the opossum died.  “My guess is that it got hit by a car,” I said to hubby.  There was not a mark on its body.  Not even from the vulture who had visited earlier and who apparently wasn’t too interested in having lunch.  There was quite a bit of blood coming from the poor opossum’s nostrils which had pooled on the driveway under its muzzle and where the green bottle flies were congregating.  “I think it’s a young opossum,” I said.  Hubby’s guess is that the opossum had been hit in the road and then something drug it up the driveway because our driveway is long.  “That’s possible, but he could have run this far after getting hit, and then died here,”  I added.  “I feel bad just leaving him lying here,” I continued.  “The vultures need to come and do their job.”  We decided to go on and mattress shop.

When we got home a few hours later, the opossum was there but had been moved.  We figured the vulture had returned.   A little while later, when we were leaving to go out again, there were two black vultures, an adult and a juvenile, next to the opossum.  They were very protective over the opossum and didn’t want to move even when my husband got closer in the truck.  Finally, they awkwardly ran into the front yard as we made our way down the driveway in the truck. “They’re definitely showing interest in the opossum,” I said.  “Black vultures can be aggressive,” I warned hubby.  I told him how I once watched a group of black vultures who had flocked to a cow carcass in a field, fight a few turkey vultures who had come to join the feast.  The black vultures won and did not let the turkey vultures near the carcass.  They make hissing noises and a noise similar to the noise a growling dog would make.  “They’re creepy,” I said.  “But we need them because what they do is important.” God love ’em.

When we returned a couple of hours later, the little opossum was no longer in the driveway, but had been moved to the grass beside the driveway.  The vultures were either not hungry or they didn’t like the taste of this opossum.  I was baffled. My assumption with vultures was that if there was carrion available, they would eat it.  These guys were proving me wrong.

So I came into the house and started researching.  I read that vultures don’t have strong talons like owls, eagles, and hawks, and their feet are actually very weak.  I read they also don’t have real strong beaks and so sometimes, if the roadkill is really fresh, they will choose to let it sit and decay, so that it is easier for them to eat.  They often can’t break into the carcass until the body starts to decompose.  That made perfect sense as to why the vultures today acted interested but weren’t “cleaning up” the opossum.  I told hubby that it was hot and humid today and tomorrow it’s supposed to be in the nineties, so I’m betting they will be taking care of business tomorrow.  That is if a fox, coyote, or owl doesn’t carry their prey off tonight.  And that’s very possible because there’s lots of wildlife around here.

I am a wife, mother, sister, aunt, friend, veterinarian, and wanna be writer. I love nature and animals of all kinds, music, cooking, and spending time with my family.
View all posts by Gail →
This entry was posted in Animals, birds, Daily Prompt, Nature and tagged black vultures, Daily Post, Nature's Janitors, turkey vultures, vulture behavior, vultures and carrion. Bookmark the permalink.