Betty June was my mother’s doll back in the 1930s.  Even for an 80+-year-old doll, she looks rough.  As you can see, years of staying up in a hot attic took its toll on Betty June. Her head and face are badly cracked.  Her left arm has nearly been amputated and is being held on by a purple ribbon.  I can’t even tell what color her original eye color was.  Her eyes look like she has very dense cataracts. 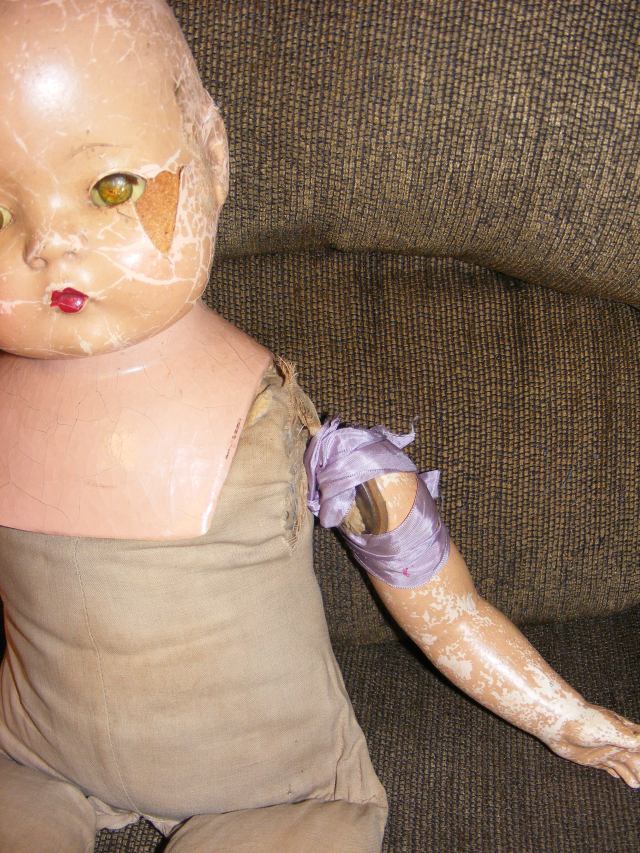 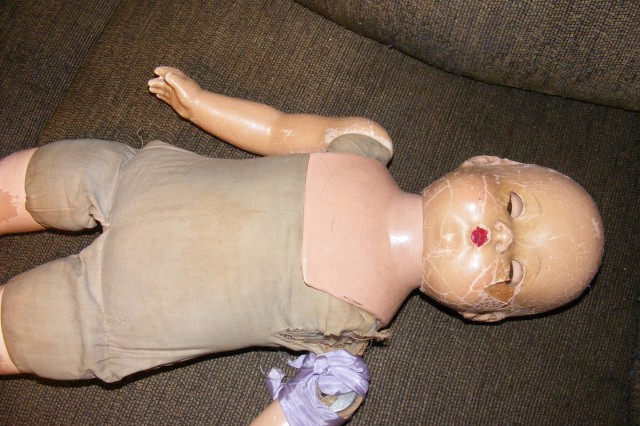 Betty June is an Effanbee Lovums doll with a cloth body and composition head and limbs.  She has sleep eyes.  I think I remember my mother telling me back in her prime she had a blonde curly wig. I imagine back in the day, she was a beautiful doll.  This is what I imagine Betty June must have looked like back when my mother played with her.

I do know that Betty June was a much-loved doll at one time.  When my mother died back in 2006, at her request, we buried her with two of her beloved dolls (a boy and a girl doll which were quite a bit smaller than Betty June– they were in rough shape too).  My mother didn’t want Betty June to just be tossed out.  Now I’m wishing we could have somehow squeezed her in the casket with my mother and the other two dolls.

But we didn’t and when my mother died, I took Betty June home.  She stays in a cedar chest at the end of my bed.  I honestly don’t know what in the world to do with this doll.  I know nothing about doll restoration, nor do I know anyone around here who does it.  I don’t know if Betty June is beyond help at this point.  And if I did find someone who could restore her, how much would it cost?  I have no idea.  I just know I can’t make myself throw sweet Betty June away but I can’t exactly leave her sitting out where she would creep people out.  Even my cats are terrified of her and when I sat her on the couch for photos, they saw her and ran.

I don’t know much about Effanbee Lovums dolls but have looked them up online.  There’s a lot of them for sale on eBay and a lot of different kinds.  Some came bald and others were wigged.  They had different colored eyes and hair and some had closed mouths like Betty June and some had open mouths with teeth.  I think they came already named and most had 2 names.  Like Betty June and Mary Lee.  Apparently, there was a “Patsy” line and there was a Patsy Ann, Patsy Joan, and a Patsy Lou.  I cannot find any Betty Junes.  I found some Betty’s, just no Betty Junes.

Every time I think of getting rid of Betty June, I think of my mother as a little girl and how she must have given this little doll plenty of hugs and kisses.  Growing up in the depression, I’m sure Betty June meant the world to my mother.  And so back into the cedar chest she goes.  I don’t know what will become of her when I leave this earth.  I know my two sons won’t want her.  Poor Betty June.

I am a wife, mother, sister, aunt, friend, veterinarian, and wanna be writer. I love nature and animals of all kinds, music, cooking, and spending time with my family.
View all posts by Gail →
This entry was posted in Uncategorized and tagged dolls from 1930s, Effanbee Lovums dolls, vintage dolls. Bookmark the permalink.

7 Responses to A Doll Dilemma