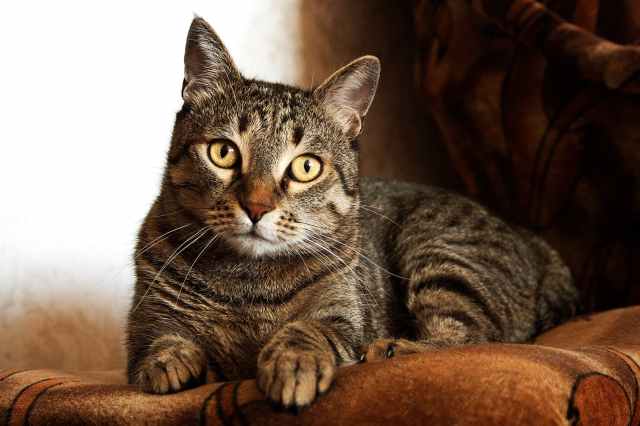 Before I became a veterinarian, I worked at a local veterinary clinic near my home as a veterinary assistant/kennel worker.  There are just some patients I will never forget.  One of those patients was a big ole very gentle and ever so precious dark tabby cat named Hugger.  He had a very fitting name because Hugger was the expert in giving feline hugs.  If you reached  your arms out to hold him, he would wrap his front legs and paws tightly around your neck and put his head on your shoulder.  And there he was content to stay.  And they say cats aren’t affectionate.  I loved sweet Hugger and I loved his hugs.  Hugger belonged to an A+ client who loved him dearly and who took excellent care of him.  Believe me when I say that Hugger wanted for nothing.

We saw Hugger a lot at the clinic.  He had one of the worst cases of feline miliary dermatitis I had ever seen, which is a skin condition in cats, often allergic in nature.  Hugger had to have frequent medicated baths.  Most cats hate to be bathed and bathing a cat can be a challenge for sure.  The majority of cats become little Tasmanian Devils at the sight of a tub and the anticipation of getting wet.  Though it wasn’t my most favorite part of my job description, I will have to say that I got pretty darn good at bathing felines, because I did so many of them.  I actually did not mind bathing cats and liked the days when Hugger was in for a bath.  Hugger was one cat who didn’t mind a bath at all.  But Hugger was an exceptional patient and was just an all around good cat.

Later, after graduating from veterinary school, I would join this same practice as an associate veterinarian.  I then became one of Hugger’s doctors.   Hugger’s owner also joined the staff as a receptionist.

The dreaded day came when Hugger got very sick and began vomiting.  A lot.  His appetite was off, he became lethargic, and he started losing weight.  Hugger was a chubby boy and loved to eat and so when Hugger didn’t eat, we worried.  And when Hugger stopped hugging, we really worried.  We drew blood and ran a battery of laboratory tests which were all normal.  His fecal parasite exam was negative.  We did abdominal X-rays and when they were developed and placed upon the lighted view box for evaluating, our hearts sank.  There, in his abdomen, was what appeared to be a large tennis ball sized mass which was near Hugger’s pylorus (the opening between the stomach and intestines).  Hugger needed immediate exploratory surgery and we feared the worst – lymphosarcoma.  Hugger’s owner was devastated.

We started Hugger on fluids and prepared him for surgery.   As I often did for my animal patients, I prayed for Hugger that day.  I assisted Dr. A., my boss, who had been Hugger’s doctor since he was a kitten.  We anesthetized Hugger, intubated him, and got him hooked up to the gas anesthetic machine.  We shaved his abdomen, carried him into the surgical suite, placed him on his back, and anchored him to the surgery table.  We hooked him up to the heart monitor and did a surgical prep on his big belly.  I said prayers through all of this.  I prayed for God to guide our hands during the surgery and to be with Hugger.  I prayed boldly that this would be a problem we could “fix.”  I prayed that He would also comfort Hugger’s owner and to help us all accept the outcome of this surgery, whatever it may be.  Most of all, I prayed for God’s will to be done.

As Dr. A. draped Hugger’s abdomen and began making the initial incision, he looked at me, and in all sincerity, confessed to me that he had said a prayer that God would let this mass just turn out to be a “big ole ball of fat.”  I smiled and said, “Yes!  Wouldn’t that be wonderful?!!”  Seems I wasn’t the only one praying bold prayers that day.

So imagine our joy, when we opened Hugger up to find what else but a big ball of fat!   The lipoma, or benign fatty tumor, was pressing on the pyloric area and keeping food from getting through the pyloric valve.  Lipomas, especially those inside the abdomen, are very rare in the cat.  The lipoma was successfully excised.  It was also noted that Hugger had a tight and narrow pylorus so a pyloromyotomy was performed (a procedure to widen the pylorus).

Hugger recovered uneventfully, the vomiting immediately ceased, and his voracious appetite resumed.  Hugger was hugging again!  He was placed on a special reducing diet and he went on to live a long and contented life.

God had without a doubt been with us in surgery that day and answered our prayers (quite literally in fact)!  I love happy endings and I particularly loved Hugger and his owner’s happy ending.  I’ll never forget the big grins on everyone’s face right after Hugger’s surgery.  We had a lot to celebrate that day.

I am a wife, mother, sister, aunt, friend, veterinarian, and wanna be writer. I love nature and animals of all kinds, music, cooking, and spending time with my family.
View all posts by Gail →
This entry was posted in Animals, cats, Memories, Veterinary Medicine and tagged God in surgery, happy endings, Intra abdominal lipoma, prayer, veterinary surgery. Bookmark the permalink.

8 Responses to God in Surgery