The Writing on the Wall

I was reminded recently of an incident that occurred when I was eight years old and in the third grade.  Don’t ask me why this experience is still so very vivid to me, but it is.

I came home from school on this particular day in third grade, and I asked my mother what the word “FUKE” meant.  My mother squinted her eyes, furrowed her brow, tilted her head slightly, and then asked me to spell the word for her.  I very innocently spelled it out for her.  F. U. K. E.  My mother stared intently at me, and then asked, “Where did you see or hear that word?”  I explained nonchalantly that someone had written it on the bathroom wall in my classroom, above the commode.  My mother only told me that it was a misspelling of an “ugly” word.  It was then that I learned the definition of the word “graffiti,” a new word in my vocabulary, and got a lecture about this art form of vandalism.  And then my mother told me that the 3rd grader who had written that word on that bathroom wall should be ashamed and that she better not EVER hear about me doing anything like that. 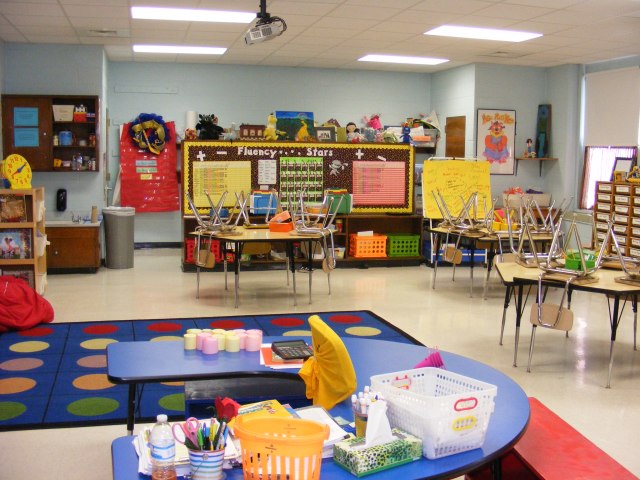 This is my third grade classroom (taken 48 years later when I went to an open house there). The infamous bathroom is in the rear left of the photo behind the brown shelves above the sink.

I went to bed that night still not knowing what FUKE meant.  But when I was laying in bed that night, I did hear my mother get on the phone and heard bits and pieces of her relating the story to someone and I heard her laughing.  I had no idea who she was talking to.

In that third grade classroom was a cloakroom in the rear of the room.  Facing the cloakroom, on the left, there was a small one-seater bathroom.  I don’t think we started using hallway bathrooms with individual stalls until the 5th grade and so most of the early elementary classrooms had bathrooms in the classroom.

The next morning, I walked into the cloakroom to hang up my coat and put my lunchbox on the shelf, and lo and behold, there was Mrs. Prater, my third grade teacher, standing in that little bathroom with a bucket of sudsy water and a brush, and she was washing and scrubbing that word “Fuke” into oblivion.  She had just about scrubbed the light greenish gray paint right off the darn wall.  I knew right then who my mother had been talking to on the phone the night before.

I visited my old 3rd grade classroom at an open house a few years ago.  The cloakroom was still there as was the tiny bathroom.  I just had to glance in that bathroom for old times’ sake.  It seemed so much smaller than I had remembered (as did the classroom).  My eyes went to the area above the commode where the word FUKE had been scrawled some 48 years previously – the misspelled graffiti word intended for a third grade audience.  But of course the walls had long since been painted.  I smiled to myself as I turned away.

It’s funny sometimes, the things we remember from our childhood.

I am a wife, mother, sister, aunt, friend, veterinarian, and wanna be writer. I love nature and animals of all kinds, music, cooking, and spending time with my family.
View all posts by Gail →
This entry was posted in Childhood memories, School and tagged bathroom wall graffiti, elementary school memories, graffiti, memories from 3rd grade. Bookmark the permalink.