Strike Up The Band! 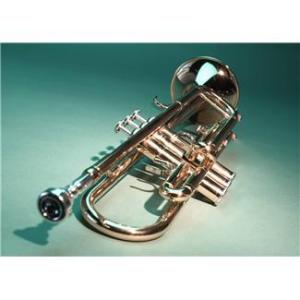 I was a band jock back in high school.  I think the term now is “band geek” or “band nerd,” but back in the ’70s we were “band jocks.”  I started playing the trumpet in the 5th grade and instantaneously, I was hooked.  I continued playing all throughout my high school years and I LOVED IT.  When I was in the 9th grade, I tried out for majorette for the following year.  There was a family in our neighborhood with two sisters who were both award-winning baton twirlers (they literally had to add-on to their house just so they could have room for all the trophies these girls won).  They taught lessons and so several girls in our neighborhood became baton twirlers and hence majorettes in high school.  In high school, I was a majorette during marching season, and played the trumpet during concert season.  I loved being a majorette too (although I hated the skimpy little sequined outfits we had to wear).  To this day, the highlight of a football game for me is the half-time band performance.  Nope, you won’t catch me leaving at half-time to go to the concession stand.  I guess once you’re a band jock (or band nerd or band geek) you’re one for life.

I don’t think the majority of people realize just how much hard work goes into being part of a marching band.  Marching bands have many obligations.  Besides performing at half-time show at football games, they contribute significantly to school spirit by playing at pep rallies, playing in the stands at football games, and marching in homecoming parades.  Most bands perform in other parades as well – some in local holiday and town parades and others in popular parades such as The Macy’s Thanksgiving Day Parade and the New Years Day Tournament of Roses Parade.  The majority of marching bands take part in extremely demanding and highly competitive weekend competitions where they are judged by a panel of adjudicators.  These students, along with their band directors and staff, have put in many long and hard hours of practicing in hot summer temperatures for these performances.  I’m from the south, and believe me, those summer practices are hot and humid!  There is band camp in the summer (and majorette camp back when I was in band).  When school starts, there are after-school rehearsals for several hours a day at least 3 days a week.  And Saturdays are spent at competitions.

Yes, it takes serious dedication to be a part of a marching band program.  Besides having to learn marching fundamentals, students also have to memorize difficult music, learn an often challenging and exhaustive drill routine, and then learn how to coordinate the three to put a show on the field.  These shows are challenging both physically and mentally.  It is difficult, demanding, and requires a heck of a lot of concentration.  But the students are out there because they WANT to be out there.  They are out there because they love what they do.

For me, being in the marching band was like being part of a great big family.  I made friends with people in the band that I continue to be friends with to this day.  Being in band taught me all about discipline and that hard work and discipline pay off.  It taught me the importance of dedication and respect, and provided me with plenty of happy memories -memories that I will cherish the rest of my life.  It taught me about winning and it taught me about losing.  But most of all, it gave me a love for music.

Last night my husband and I went to a high school football game at the high school our youngest son attends, as we do most Friday nights.  I felt that old familiar sense of pride when the band played our National Anthem.  I loved it when most of the stadium stood and applauded at the end of the band’s half-time performance.  I always wonder though if anyone who wasn’t in band themselves knows just how much time and effort these student musicians have put into the performance they see on Friday nights.  I wonder if they understand how much these band kids love what they do.  I wonder if they know the excitement and pride the students feel when they step out on the field and hear their band announced.  I wonder if they know how much pride is felt during the playing of the National Anthem and the cold chills that run through their body.  And I wonder if they understand the absolute thrill they feel when they see audience members standing and applauding.

A few weeks ago, my son’s high school team played my Alma Mater so I got to see my “old” high school band.  I still felt the pride I felt when I marched in that band all those years ago.  And I still got cold chills when I heard them play that old familiar fight song.  Yeah, I guess I’ll always be a band nerd.  But in my eyes, that’s a good thing.

High school marching bands desperately need support – physically, emotionally, and financially.  I always find it sad that at marching band competitions, most of the people in the stands cheering are the band parents and family of the band students.  How sad if that were true at football games…. if football parents were the only ones cheering in the stands.  No student body, no administration, no fans, no band, no band parents.  Hard to even imagine, huh?

Please support marching bands.  They deserve it, not only for the entertainment they provide, but also for the hard work and dedication that goes into their performance.  And you’d be surprised at just how much your applause and support encourages these kids to perform better.  It can make all the difference.

Music and rhythm find their way into the secret places of the soul. – Plato

3 Responses to Strike Up The Band!